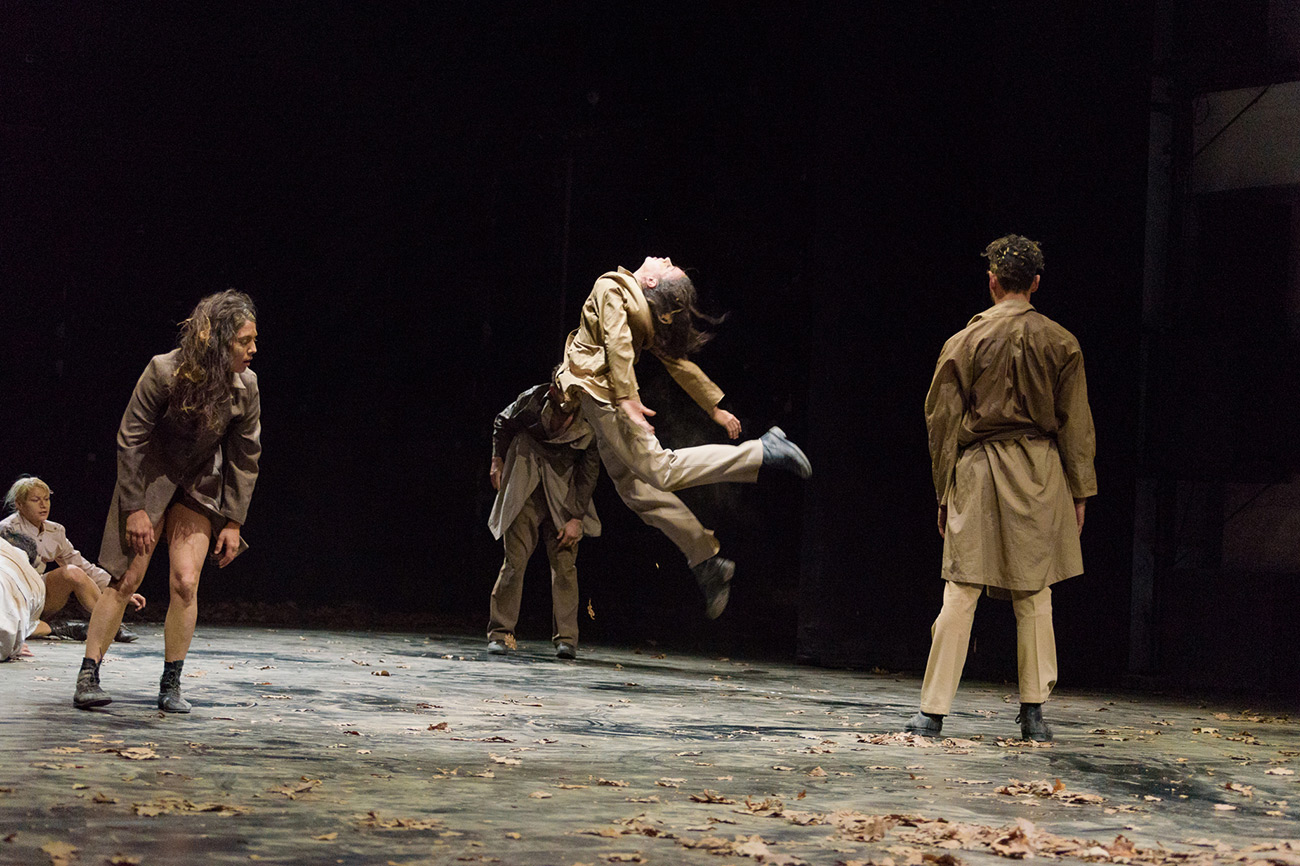 In tempus fugit seven dancers continually move as a group, as a flowing unit. Propelled forward by an inner unison, they produce an allembracing tide. A round dance like a single shared movement nevertheless at moments revealing the individual. Nothing lasts forever – the flow of time cannot be detained. But how do we really live in it? Has the hustle and bustle of daily life consumed us all? Compared to the breathlessness of our lives, the horde resembles a muscle, brimming with vitality and solidarity. Mass and identity, power and momentum are its central phenomena – the group as a microcosm that frees us from the prison of isolation and unleashes new strength.

“Toula Limnaios’ associative visual worlds reveal disturbing and simultaneously intense as well as precise movement details… The striking strength of this choreographer lies in her ability to stage a scenic plurality of opposing events that culminate in a pensive final metaphor. This is what leaves its mark in the audience’s memory.”
(Neues Deutschland/ tanznetz)

A cie. toula limnaios production in cooperation with the HALLE TANZBάHNE BERLIN and with the kind support of the Cultural Department of the City of Berlin.

The cie. toula limnaios is an ensemble for contemporary dance, founded in 1996 by choreographer and performer Toula Limnaios and composer Ralf R. Ollertz. In 2001, they were awarded the »Meeting Neuer Tanz« prize. In 2004, their Beckett trilogy was made into a television film entitled »atemzug« for ZDF/arte. The company has received funding from the City of Berlin since 2005 and were selected by the Fonds Darstellende Künste to receive Conceptual Funding for »Leading Ensembles in the Field of Independent Theater and Dance« from 2008 until 2010. In 2012, they were awarded the ‘’george tabori prize’’.

In addition to their artistic work, they are strongly dedicated both to promoting innovative working structures, as well as establishing equality for dance in society. The cie. toula limnaios ensemble presents 50-60 shows every year and works with 16 salaried employees, who are supported by an even larger number of closely associated freelancers. With its flexible, lean, but highly effective structure and in co-production with international partners, the company continuously produces ensemble work of exceptional quality, making them one of the most successful ensembles for contemporary dance today. As a representative of the German dance scene for the Goethe Institut and the Federal Foreign Office, they have presented their repertoire across Germany and worldwide since 2005. The company is institutionally funded by the City of Berlin’s Department for Cultural Affairs since 2014.

The cie. toula limnaios show dance that is watchful, critical and bold – with concern for humankind, made by and for people.

Toula Limnaios was born in Greece in 1963. After completing her studies in classical and modern dance, M. Alexander and Laban technique, music and dance education in Brussels, she worked as a dancer with Claudio Bernardo and Régine Chopinot, and as an assistant with Pierre Droulers. Limnaios received further education at the Folkwagen University, where she soon became a member of a Folkwang Dance Studio under the artistic direction of Pina Bauch. Limnaios made her name by performing live- improvisations of the Duo Landscapes, she founded together with the musicians Conny Bauer and Peter Kowald. In 1996 she founded cie. toula limnaios, a contemporary dance company that brought her choreographic art onto the stages worldwide. Apart from managing her ensemble, Limnaios works as a guest choreographer at the Theater Osnabrueck and the Frankfurt University of Performing Arts. Between 2007 and 2008 she was a guest professor at the „Ernst Busch“ Academy of Dramatic Arts in Berlin.

Ralf R. Ollertz was born in 1964. He studied composition, electro acoustic music, conducting and piano in Germany and Italy with Nikolaus A. Huber and Salvatore Sciarrino and later at the Folkwang University. Over the past years he has written not only chamber and orchestra music, but also radio dramas, music for the theater, movies and dance for which he received several international prizes and grants. His opera car crash has been presented and commissioned by the city operas in Hannover and Stuttgart. His work as a composer and conductor has taken him through Europe, South America, Australia, Japan, the USA and Africa.

1997 Relocation of the headquarters to Berlin

2003 Opening of its own venue HALLE TANZBÜHNE BERLIN

2008 – 2010 Conception-funding from the Fond for Performing Arts

2012 george tabori award of the Fund for Performing Arts

since 2014 Institutional funding from the city of Berlin 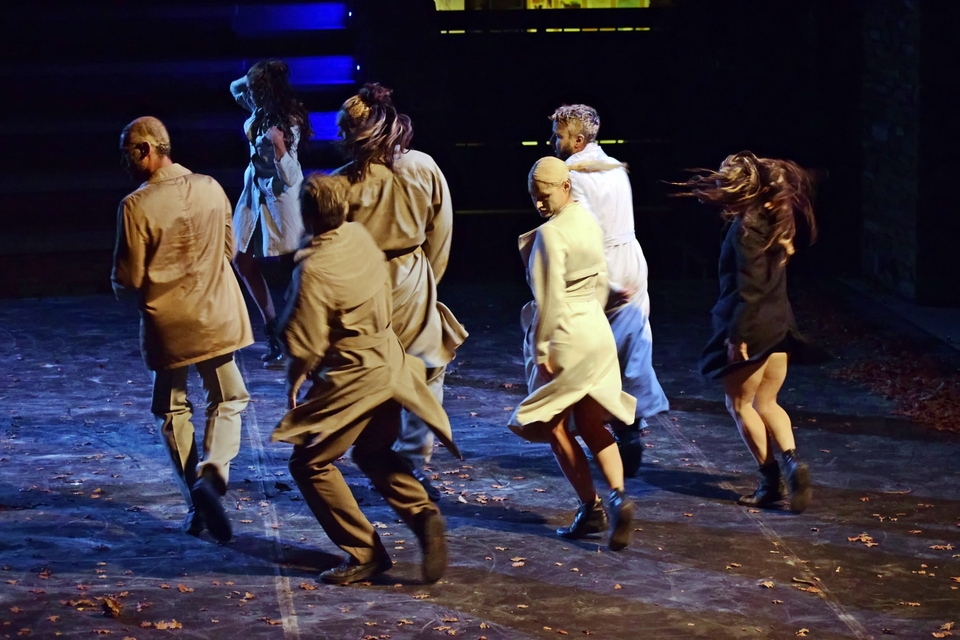 An incredible creative power is ascribed to almost every true artist; yet there are two kinds of artists – those kissed by the muse every few years and those Toula Limnaios belongs to. The Berlin-based choreographer never ceases to evolve, regenerate, and scrutinize in order to bestow upon the audience new and challenging experiences that go under the skin. Her newest production “tempus fugit” can be best described as a concentrate of harrowing and powerful emotions: Toula spares nobody here! Just as in her poetic “minute papillon” (December 2015), the human herd behaviour and the consequent peer pressure stand in the middle of Toula´s narrative interest. Her piece tackles the shallow depths of present times and penetrates into the spaces in which one sweats out their emotions. The intertwining and divisive lines of the seven dancers (Daniel Afonso, Leonardo D’Aquino, Daeho Lee, Katja Scholz, Hironori Sugata, Karolina Wyrwal, Inhee Yu), merge to seize the entire space with a hectic performance. A strong gestural intensity emerges between uplifts and tormented glances.

On a stage covered by a sea of dead leaves, a dance of automatons commences and exposes one or two black sheep on the horizon. The poignant Katja Scholz is one of them. The virtuous dancer attempts to stand out, yet she quickly returns on the planned track, like a small obedient robot roughly guided by one of her ‘master-like’ colleagues. An additional strong image: each protagonist strives to imitate the movements of an infant or a doll that is continuously abused by the others. An all-too-effective metaphor that touches with its cold (and perhaps truthful?) perversity.

Resembling puppets, the bodies (covered with dry clay) swirl, intersect, crash against the wall and stumble over each other. Like time, they go backwards and forwards in entanglement which simultaneously constructs and collapses them. Hearts are also short of breath with the rhythm of this destructive, frantic life on the edge of the madness. The flesh is accentuated and the faces are tense. As the lines are dispersed, they nevertheless fuse together in a common and cacophonic roar.

In combination with the unusual musical soundtrack (Haydn, Mahler and Ralf R. Ollertz), the power of the form fluctutates between attraction and aversion. This newly arranged score undeniably fits the circumstances and is in perfect tune with the oppression manifested. A glimmer of hope ? Not really. The last scene, in which Leonardo D Aquino tramples over the bodies laughing, leaves everyone in the audience pensive.” 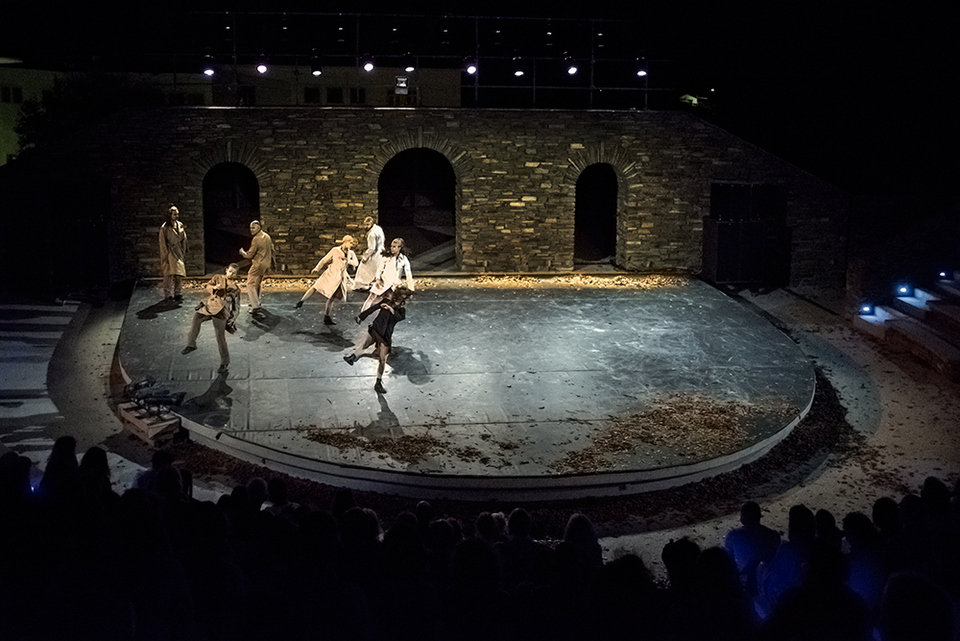 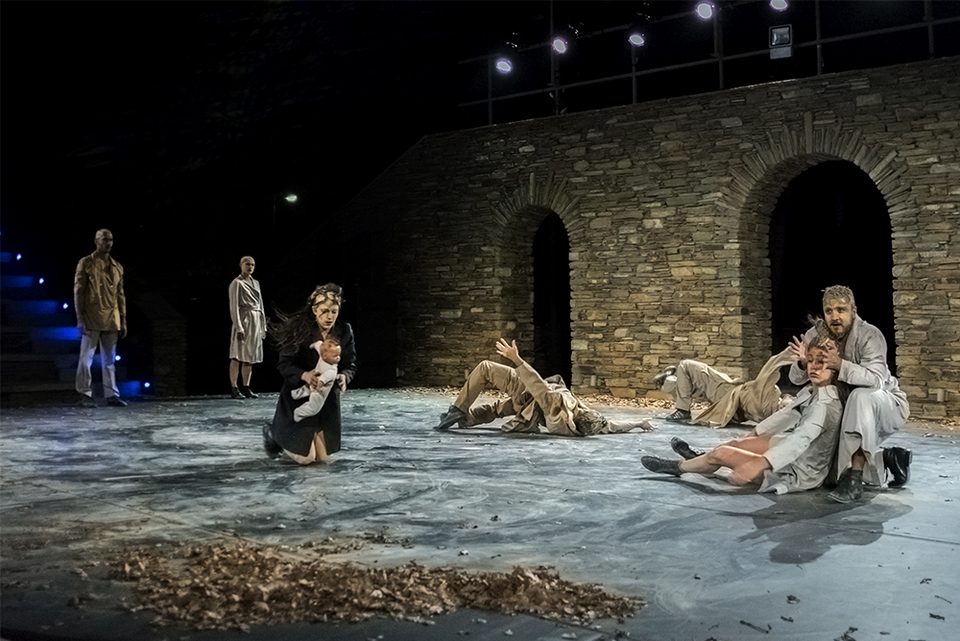